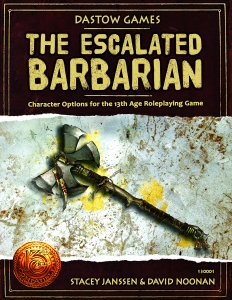 The Pathfinder version of “The Pristine City” is well under way, and we’re planning to get that out sometime in November. Meanwhile, we wanted to share some of the plans we have once the adventure is released in both systems.

We’ve been working on class books for the 13th Age Roleplaying Game: the Escalation Series. Starting with The Escalated Barbarian, we’ll release each book digitally as we complete them, possibly collecting them into one book once they’re all finished. These books will have new spells and abilities, new uniques, new backgrounds, and new magic items specially designed to give more breadth to your 13th Age character.

For this series, we’ve acquired a very talented artist named Liz Green. We’ve already commissioned several covers, and we’re very pleased with the results. We expect the first book to be out by the end of the year.

Fight for your people, your friends, or yourself! With The Escalated Fighter, you get access to new talents, backgrounds, and one unique things, plus new exotic weapon options to make you unlike any other fighter.