At DASTOW we’re expanding our 5E content. It’s a good system and one we have lots of familiarity with. One promise, though: I want no part of the nostalgia parade.

Look at the existing 5E products, and you’ll see a lot of work inspired by the great adventures of yesteryear. Look at all the remakes, “spiritual successors,” and straight-up reprints. The dream of the ’80s is alive in Renton, Washington.

I have close friends who wrote a lot of the content in Tales from the Yawning Portal, but just seeing it fills me with sorrow. This could have been something new, but it’s a “greatest hits” album with 5E stats. At least they had the honesty to put “yawning” right there in the title, eh?

Imagine if they’d put the effort into something new. I am aware that WotC is a business, and their greatest hits compilation is going to outsell a new album. But that’s true only in the short term. What do you do in ten years? Do a remake of your remakes? Nostalgia is not a check you can just keep cashing.

The tail-eating isn’t just a WotC thing by any stretch; it’s just that they have one of the longest tails in tabletop. Tails are at the top of the menu in the video game world. A few years ago, I went to E3, North America’s biggest trade show for video games. As I stood at the entrance, I saw a dozen banners draped over the arena and the surrounding buildings—each banner at least five stories tall.

Every single video game mentioned had a number at the end: Far Cry 3, Borderlands 2, Assassins Creed III, Call of Duty: Black Ops II, Halo 4, Resident Evil 6…you get the idea. Imagine what those studios could have accomplished with those teams working on new worlds and experiences instead?

Again, they’re businesses—I get that. But it’s short-term thinking. All those billion-dollar franchises started as one-offs, and if you never start anything new, you’ll never get to the point where you’re contemplating the lucrative sequel.

In our own tiny way at DASTOW, we’re going to deliver new experiences. Maybe someday they’ll be part of someone’s nostalgia kick, but honestly I couldn’t care less about that right now.

New stuff, as fast as we can dream it up. ’Cause that’s a more satisfying meal than a tail could ever be. 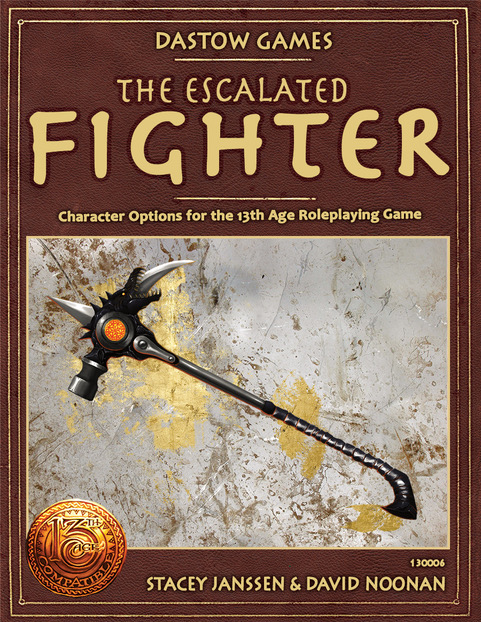 Fight for your people, your friends, or yourself! With The Escalated Fighter, you get access to new talents, backgrounds, and one unique things, plus new exotic weapon options to make you unlike any other fighter.